In mid-June I was invited to speak on digital heritage at the first meeting of the U.S. Chapter of the Association of Critical Heritage Studies.  Held at Arkansas State, the event was organized by Gregory Hansen and Michelle Stefano.  There were presenters and attendees there from folklore, history, anthropology, archaeology, library sciences, archives, museums, and other fields.  It was a pleasure to spend a few days talking about heritage with people equally passionate about the topic.

This meeting is part of a growing movement to establish critical heritage studies in the U.S., a movement that has grown in recent years abroad (read about it here:  http://www.criticalheritagestudies.org/.

Here’s a link to the conference Website for more information:  https://criticalheritage.org/2017-meeting/. 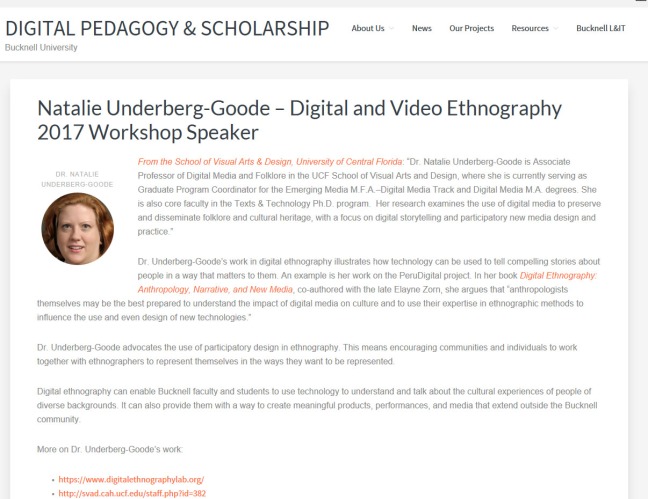 Earlier this summer I had a wonderful visit to Bucknell University in PA to talk about my research and meet with faculty who want to integrate more digital methods into their teaching and scholarship. Wonderful hosts, beautiful campus, interesting work. Thanks to workshop organizer and fellow Indiana University Folklore alum Jeff Tolbert for organizing such a stimulating event! Here’s a link to more information on the talk: http://dps.bucknell.edu/natalie-underberg-goode-digital-and-video-ethnography-2017-workshop-speaker/

Last semester, my Digital Media students helped me curate the first set of digital stories that were published on the new online companion site to The Florida Review, called Aquifer:  The Florida Review Online.

The Florida Review is an internationally distributed literary journal published out of the University of Central Florida, and edited by Lisa Roney.  Throughout the semester, the students first analyzed digital stories according to ideas about personal narratives and visual storytelling covered in class, then proposed ways to leverage the characteristics of Web 2.0 storytelling in their presentation, and finally proposed a selection rationale for accepting digital stories for online publication.  So far, two digital stories have been published online (https://floridareview.cah.ucf.edu/aquifer), and more are in the pipeline.

We’re seeking more submissions for publication consideration as the project moves into the future.  Here’s the link to submit a story: https://floridareview.submittable.com/submit.

My UCF Digital Media colleague Peter Smith and I recently returned from a thought-provoking and fun panel on conveying heritage through board games.  CAA (Computer Applications in Archaeology) 2017 was hosted by Georgia State in Atlanta, and Peter and I presented on a board game prototype that presented Peruvian cultural heritage through game mechanics that required players to simulate reciprocal thinking and decision-making.  The panel was organized by Erik Champion from Curtin University in Australia, who a week later came to UCF to give a talk on virtual heritage, serious games, and cultural learning.  Thanks to SVAD’s Games Research Lab for letting us use a space in their lab for brainstorming and developing the prototype!

Visual Ethnography v5, n2 is out!  Visual Ethnography is an international, peer-reviewed journal, and this special issue features articles by Lori Walters and Robert Michlowitz; Bartley Argo, Nicholas DeArmas, Amanda Hill, Sara Raffel, and Shelly Welch; Pavel Borecky; Tammy Clemons and Timi Reedy; and Natalie Underberg-Goode and Carolyn Hopp.  Proud to say that former students from my Ethnographic Storytelling and New Media and Applied Interactive Story classes are authors of one of the articles!

I was happy to learn this week that The Routledge Companion to Intangible Cultural Heritage is out.  It was edited by Michelle Stefano and Peter Davis, and I contributed a chapter on “Conveying Peruvian Intangible Heritage through Digital Environments.”  The volume itself features a wide array of work on ICH from scholars and practitioners in diverse disciplines and professional contexts.  I’m looking forward to receiving a copy of the book soon, and hope my library picks up a copy too!

A couple weeks ago I had the honor of attending the Science of Storytelling Summit at the University of Florida.  Organized by the UF College of Journalism and Communications, the event was held October 27-28. Inspired by the work of cognitive psychologist Jerome Bruner, the summit brought together a group of interdisciplinary scholars from the United States, Canada, and England to consider questions such as what makes stories effective and why they affect us.

The summit was intended to foster new ideas, insights, and interdisciplinary research collaborations among storytelling researchers from diverse fields.  Sessions included discussions facilitated by journalists from NPR and Fusion and “synthesizers” from UF’s Journalism and Communications program who shared insights from each session with the larger group. 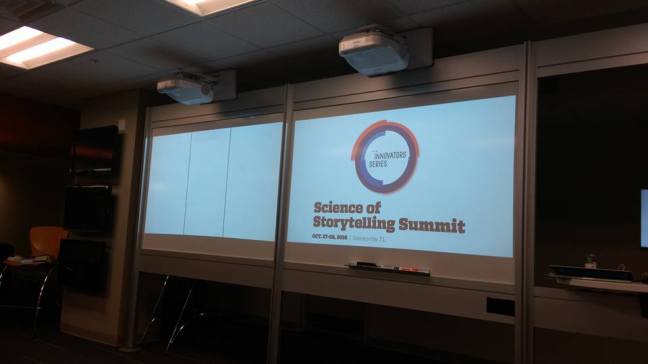 Please consider applying to this workshop at CAA 2017! Deadline is Friday.

Here’s the link to submit an abstract: http://ocs.caaconference.org/index.php…

Mechanics, Mods and Mashups: Games of the Past for the Future Designed by Archaeologists

Are you a fan of Assassin’s Creed but upset over how it could have made history exciting without having to employ and manipulate central historical characters? Love Lara Croft: Tomb Raider if only the tomb-raiding (stealing) mechanics could be replaced by something more meaningful? Wish that the Total War Series allowed you to employ agent modeling to test competing archaeological theories of migration, colonization and invasion or just to improve its historical accuracy? Dream you could use the language, graphic vision and immersion of Far Cry Primal in the classroom to explain (through engaging interaction) the Mesolithic rather than primarily use it as a backstage to fight semi-believable creatures? Then this workshop is for you. Correction. This workshop is BY you.

Archaeologists and people of a historical persuasion:
• Either take a game with an inspiring concept, technique or mechanic:
• OR extrapolate a current or past game to a game or simulation of the future
• OR they share their vision of a game or simulation that reveals, expresses or augments their own research.
At the workshop the writers will either:
• Bring their own designs, video cut-scenes, and illustrations and media depicting what this new vision would look like
• OR have some form of play-testing demonstration, cards, or illustrations or physical play-throughs (preferably involving the CAA workshop audience) revealing how this new level, mod or gameplay episode COULD be experienced or how it could be revealed.

Potential tools:
Gameplay cards, game prototyping tools, scenes or videos from a 3D editor or game editor (Unity, Unreal, Blender), board games as prototypes, playing cards, physical artifacts that are role-played by the presenter, illustrations, slideshows, game editors (like the SIMS: https://www.thesims.com/en_GB) used to make films (Machinima), roleplaying videos, flowcharts, interactive fiction (like https://twinery.org/). We will provide a fuller list of tools and examples to potential attendees before the workshop.

Equipment:
PC with sound and display, some floor space to move around in for physical re-enactments. Tables or some form of desk to provide written or graphical feedback.

Length:
Participants: 26 maximum (ideally) where 6 present. We require half an hour a presenter so three hours for 6 presenters, 6 hours a whole day if we want to go to 12 presenters.
Ideally the non-presenting audience is not too large, preferably up to 20.

Outcome:
We will approach a creative publisher (Liquid Books, University of Michigan Press or other) to provide an online or printable output of the demonstrations and the audience feedback.
We would also like to invite presenters – if they can make it – to a workshop at DIGRA2017 Melbourne Australia to test out their demonstrations and play-throughs to game academics.

I was excited recently to learn that my good friend and colleague Norma Ledesma (UCF-Modern Languages and PeruDigital language and cultural consultant) will be able to collaborate on a project with another UCF faculty member from COPHA related to the PeruDigital Website (http://www.perudigital.org). The grant was received by Latin American Studies director Consuelo Stebbins, and Norma Ledesma and I are leading projects within this grant, titled “America:  Believing in Cultural Diversity.”  The project will involve a collaboratively-designed online exhibition of Peruvian ceramics from Cusco that will bring together folk artists and medical practitioners in an online dialogue about the connections between arts and health.  Here’s a link to more information on the grant and UCF Latin American Studies:  (http://las.cah.ucf.edu/2016/10/03/las-grant-award/.